Hi peeps! We have Kim Fielding stopping by today with her upcoming release Redesigning Landry Bishop, we have a brilliant guest post from Kim, a great excerpt and Prime’s review, so guys, check out the post and enjoy! ❤ ~Pixie~ 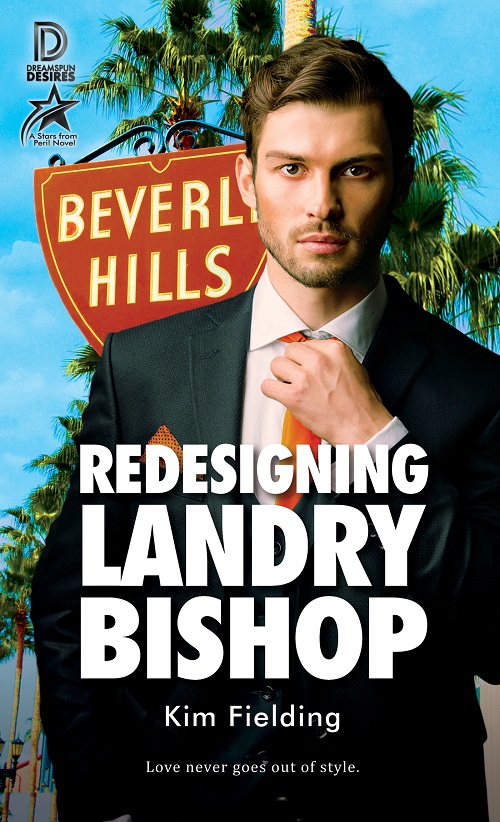 Love never goes out of style.

Landry Bishop fled his tiny hometown and never looked back. Now his expertise in food, fashion, and décor has earned him all of Hollywood’s glittering perks. But with his husband deceased and his personal assistant retired, Landry has nobody to rely on—and no one to help him indulge his secret cravings.

Casual, plainspoken Jordan Stryker seems a dubious choice of a PA for someone as formal and self-controlled as Landry. Jordan’s questionable fashion sense and limited kitchen skills don’t exactly enhance his résumé. But as Landry soon realizes, Jordan has many attractive qualities too.

With a strong pull toward Jordan, new career opportunities on the horizon, and a persistent tug from family back home, Landry is in a quandary. He can advise others on how to make their lives special, but what should he do about his own?

Hi, I’m Kim Fielding, and I’m happy to be here today. I have a new book out this month, Redesigning Landry Bishop.

This book is the second in the Stars from Peril series (the third will come out in October). These books can be read as stand-alones or in any order. While each book features a different couple, one guy in each story is from the small town of Peril, Nebraska, but has moved away and made it big in the world. But a little bit of their hometown remains in each man’s heart.

Peril is fictional, although it feels very real to me. It’s based on my own experiences living in and—later—traveling through Nebraska, which I think is an underrated state. People fly over it or zoom through it on the freeway, rarely sparing it much thought. It’s in the center of the country, it’s sparsely populated, it’s mostly flat, and it’s full of farms in the east and cattle ranches in the west. Oh, and a whole lot of rabid college football fans. That’s probably the extent of what most people know.

But in truth Nebraska is a complex place with its own unique charms. Nebraskans are friendly. They placidly endure a range of pretty miserable weather. They share an ethos delicately balanced between Midwestern and Western. They celebrate quirks like Carhenge (a replica of Stonehenge made from old cars) and Harold Warp’s Pioneer Village, which is a collection of… collections. They founded Arbor Day in the United States. They house their state government in a capitol building that contains some amazing artistic and architectural features—and which has a silhouette that many people fondly refer to as the Penis of the Plains.

Nebraska has beauty as well. True, the grassland plains of the east and central parts have given way almost entirely to corn and other crops, but there’s a certain attraction to horizons that stretch forever. The Platte River meanders its shallow way through much of the state, occasionally spreads with overwhelming floodwaters, and provides a home to many species of birds and animals. The Sandhills—an expanse of grass-covered sand dunes that create a unique and important ecosystem—lie in the north-central part of Nebraska and provide the setting for Peril.

Nebraska isn’t necessarily an easy place to live, especially for young people in the rural areas. Landry Bishop left Peril for Los Angeles as soon as he graduated high school. But Nebraskans like to boast that the place grows on you—something I can attest to, since I’m still fond of it many years after I attended graduate school there. And Landry may find he hasn’t abandoned Peril as thoroughly as he believes.

Have you been to Nebraska? Is there some underappreciated place that you’re especially fond of? Half an hour later, while Landry was puttering around with an experimental tabbouleh recipe, Jordan and Elaine joined him in the kitchen. “Try this,” he ordered, handing them each a spoonful.

Jordan made approving noises, but Elaine frowned. “That’s not a grain.”

“For people who want to eat grain-free.”

“If you don’t want to eat grains, you shouldn’t be eating tabbouleh.” She took Jordan’s spoon along with her own and washed them in the sink.

“I like it,” Jordan announced. “It’s kind of crunchyish.” He seemed sincere.

“Hey, um, you didn’t really have an important phone call, did you?”

“No. That was Elaine rescuing me.”

Landry pushed aside the interesting information that Jordan was attracted to men. His PA’s sexual orientation was irrelevant. He also pushed aside a stupid and inexplicable jab of jealousy. If Jordan wanted to fantasize about group sex with hunky furniture deliverymen, that was none of Landry’s business. So he focused on the question itself.

“Why do you think those extremely attractive men were so interested in me?”

“Um, because they were throwing themselves all over you.”

“’Cause you’re damned hot too.”

Even as Landry’s face heated at the unexpected compliment, Jordan’s cheeks turned a charming shade of pink. Interesting. Their gazes locked so tightly that Landry wondered if either of them would ever look away. Or if he wanted them to. 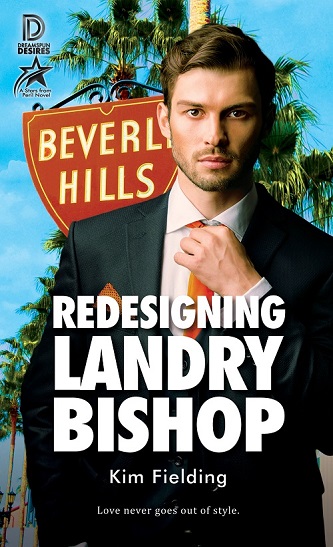 Landry Bishop fled his tiny hometown and never looked back. Now his expertise in food, fashion, and décor has earned him all of Hollywood’s glittering perks. But with his husband deceased and his personal assistant retired, Landry has nobody to rely on—and no one to help him indulge his secret cravings.

Casual, plainspoken Jordan Stryker seems a dubious choice of a PA for someone as formal and self-controlled as Landry. Jordan’s questionable fashion sense and limited kitchen skills don’t exactly enhance his résumé. But as Landry soon realizes, Jordan has many attractive qualities too.

With a strong pull toward Jordan, new career opportunities on the horizon, and a persistent tug from family back home, Landry is in a quandary. He can advise others on how to make their lives special, but what should he do about his own?

Review: Redesigning Landry Bishop is the second book in Kim Fielding’s Stars of Peril series for Dreamspun Desires. In the past I’ve enjoyed a lot of Fielding’s stories, though while I can say that she is an author that I enjoy, I would be hard pressed to specifically name books, unfortunately. I have to admit that I had to go back and check which was the first book in this series and if I had read it – which I did (The Spy’s Love Song), one that I enjoyed well enough for the reading but I think I much preferred the audio (but that’s a review for another time).

You don’t need to have read the first book in the series, both books act as standalone books, about men from the small town of Peril who became famous in their respective industries. Except for brief mentions in both books about “the other famous guy from Peril” there are no other solid links between the two.

Landry Bishop fled the small town where he grew up for the glittering lights of LA, where he has eventually become a style, food and home décor guru catering to the rich and famous, as well as making appearances on day time TV. He is essentially Karamo, Bobby and Antoni from the new Queer Eye all rolled into one package. However, at the moment life is a little stale and part of that is because his husband had died a couple years earlier which is he hasn’t quite yet taken the final step in grieving, coming to grips and moving on. But hey, everyone mourns different. It was a complicated relationship but it was a happy one. But now Landry is losing his beloved PA and needs a new one. His PA chose her replacement in her sister’s brother in law (or something as complicated as that) and Landry is trying to avoid the new changes in his life at every turn.

Jordan Stryker needs a job and is given the opportunity of a lifetime, although he isn’t about the glitz and glamour of LA and is a really down to earth sort of guy. This makes him perfect as Landry’s PA, as soon as Landry gets used to that, but it also makes him perfect as Landry’s love interest because these are the qualities that Landry absolutely needs in his life. Jordan is also quite funny because he is so different to Landry, he can’t cook, he can’t choose an outfit to save his life and that keeps Landry on his toes. When things turn romantic a whole new world opens up for both guys as they adjust to the changes in their lives and learn how they can be together in this crazy world.

This is a super sweet romance, with a sprinkling of small town roots and a sprinkling of celebrity, it is the classic boss falls for assistant type book, and if that’s your thing, you will not be disappointed at all.