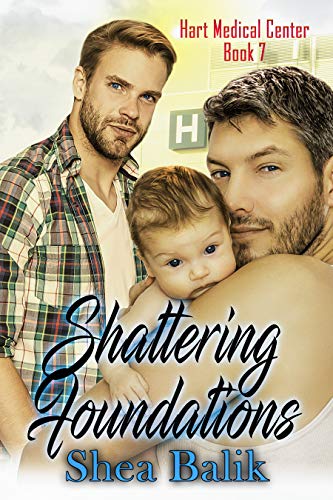 Blurb: Doss Callaway had never dreamed he’d have a family since he was basically infertile. After all,
what Alpha would want an Omega who couldn’t father a child? It was why he’d become an
obstetrician, to help other Omegas find a way to have the life he would never have.

Landon Odell had been forced to put his carefree life on hold when his parents had died and
he’d become the guardian to his three-year-old baby brother. Now that his brother was grown,
Landon hoped to never have that kind of responsibility again.

Fate had other plans for these two. The only problem – so does the Hart’s Medical Center
stalker and accomplice. Will Doss and Landon be able to find a future together, or will one of
them die when the stalker kills for the first time?

Warning: Rape is involved in this story, although the actual act is off screen. Although each couple in this series gets their own HEA, you should read the entire series for the ongoing story arc!

Review: Dr. Doss Calloways has a busy life. He loves his job of delivering babies and helping omegas. When he’s called to the emergency room to treat a raped omega he jumps to conclusions when the omega’s, Braccen, brother barges in demanding answers. Alpha Landon has been raising Braccen sine their parents deaths when Braccen was only three.

Braccen was promised to an alpha name Yurick who took matters into his own hands after being refused Braccen’s hand by Landon. This is where Doss and Landon meet and Landon learns of the stalkers. In an attempt to keep Braccen safe they move in with Doss.

The stalkers begin rearing their heads and finally we find out at least who one of the stalkers is.

Intense and scary good. I liked that the story was not as focused on the couple in this one. There were a lot of moving parts that brought this story to life.