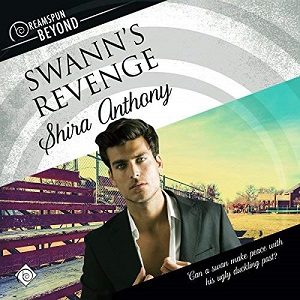 Blurb: Can a swan make peace with his ugly duckling past?

Chubby geek Jimmy Zebulon’s heart broke the day his high school crush, Danny Parker, looked on as his teammates tormented Jimmy. Fifteen years later, Jimmy is long gone, and from his ashes has risen Graham Swann, a movie-star-handsome law firm owner. Graham thinks Jimmy and his past are long forgotten – until attorney Dan Parker shows up for his first day of work.

Getting injured playing college ball was the best thing that ever happened to Dan. It turned his future in a better direction and allowed him to emerge from the closet that trapped him.

Graham wants to believe his childhood dream can come true, but he can’t bring himself to tell Dan who he really is – and their pasts might ruin any chance for a happily ever after….

Review: I approached this audio book with a little trepidation. Actually, make that a lot of trepidation.

I’ve recently had a rather, shall I say, mediocre experience with both author and narrator. Shira Anthony is a relatively new author for me, I’ve now enjoyed two out of three books I’ve reviewed. Likewise, for Peter B Brooke, I can’t remember the number, but I had one not so good experience and a few pleasant ones. And so, I cheated. I started to read the eBook to see how I would go before getting the audio. I am very pleased to say I was quite happy – with both the story and the narration.

Swann’s Revenge is very much an ugly duckling type tale. Graham Swann reinvented himself from the pudgy geek, Jimmy Zebulon, after a horrific time in high school. He had a massive crush on one of the star jocks, Dan Parker. But Dan had always stood and did nothing as Jimmy experienced merciless bullying from Dan’s team mates.

Now fifteen years later, Graham (Jimmy) has come a long way and turned his life around completely. It was so good to see that humiliated and bullied teen become such an awesome guy – sort of an F you to all bullies. He lost the excess weight, looks after himself well, has got a career that he has worked hard for and is insanely successful as the owner of law firm.

Things take a strange turn when Graham hires a new guy, who happens to be his high school crush, Dan Parker. Things have not entirely worked out well for Dan in some ways, an injury ended hopes of becoming a profession sportsman. However, the direct his life and career since took him has been nothing but great for Dan. Meeting his new boss, Dan is enchanted by the handsome man and is ready to do anything to take down his defenses and start something romantic. Dan doesn’t realize at all that Graham Swann is the kid he knew as Jimmy Zebulon – I mean, fifteen years later, he wouldn’t. But Graham has deep running scars from his time in high school and so Dan’s pursuit of the sexy guy is hampered without Dan realizing.

This is a super sweet book with a lot of heart. This is about redemption, getting over the past and finding (or rediscovering) love. That is exactly what I love about this story because the plot could have so easily become a horrible revenge story, but thankfully that didn’t happen. Dan also has a cute kid called Lacey and that was just the icing on the cake. It’s a thoroughly enjoyable and light-hearted read. 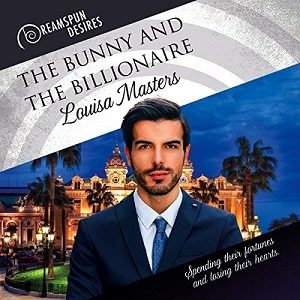 Title: The Bunny and the Billionaire

Blurb: Spending their fortunes and losing their hearts.

After getting off on the wrong foot – as happens when one accuses a stranger of being part of the Albanian mafia – their attraction blazes. Léo, born to the top tier of society, has never known limits, and Ben, used to budgeting every cent, finds it difficult to adjust to not only Léo’s world, but also the changes wealth brings to his own life.

As they make allowances for each other’s foibles, Ben gradually appreciates the finer things, and Léo widens his perspective. They both know one thing: this is not a typical holiday romance and they’re not ready to say goodbye.

Review: Alright, so this audio book has left me a bit confused. Having read the book and now listened to the audio of The Bunny and the Billionaire, this book is still the only exposure I’ve had to author Louisa Masters. But I remember enjoying the ebook well enough that I was keen to listen to the audio. Also, I liked the idea that I had to suspend my disbelief for a number of hours while I listened to this almost Mills and Boon type romance with an ordinary guy and a rich European Tycoon.

The story is about Ben – he’s a nurse from Australia (he’s from Melbourne which gave me problems when it came to the actual narration). He was a private nurse who got a shit ton of money from a client who died – you will need to suspend your disbelief for this part of the story. When I originally read the book, I found it just weird and had struggled to relate to the character. However, I knew what I was getting into, so I was more than happy to suspend my disbelief and enjoy the ride and wish I could be Ben. In this aspect I enjoyed the audio more than reading the text.

Enjoying his European holiday of a life time, Ben meets rich French/Saudi playboy Leo Artois. (Am I still the only one who keeps thinking of the beer Stella Artois? Not the point). The point is, Ben meets Leo at a Monaco casino and the two of them just click. There is plenty of sweet romance as well as hot sexy time. I really enjoyed that these two guys got to know each other, and it wasn’t just about Leo showing off his lavish lifestyle to Ben. Or Ben showing off his insanely large inheritance. I really liked how these two tried to merge their lives as they got to know each other. My favorite scene would have to be where Ben made Leo cook chicken parma (aka parmigiana or as we say in South Australia, parmy).

The only issue that I had with this audio was the narration. I very rarely have issues based solely on the narration and I really hate that I have to write this, but it is the truth. While I would probably rate the story a 4/5, I have to bring the overall rating back to 3 purely based on what I can only say was painful narration. I’ve heard Peter B Brooke narrate once before and I absolutely loved it.

However, I found the accents used for many of the characters really hard to get past. The French accent used for Leo, as well as his cousin Malik and best friend Lucian was borderline comical – if you’ve ever heard the stand-up comedians Danny Bhoy and Adam Hills do a French accent that was exactly what I was thinking. And if that wasn’t bad enough, I really struggled with the accent adopted for Australian nurse, Ben and his best friend Dani. The accent for the Aussies seemed to oscillate between American mid-western, some sort of British to a bad impersonation of Crocodile Dundee. Unfortunately, none of these could be passed for an Aussie from Melbourne. (Seriously, when I first heard it all I could think of “You call that a knife?”). I hate to say it, but I really struggled listening to the audio based on the accents alone. It would have been better to have an Australian narrator putting on a bad French accent. 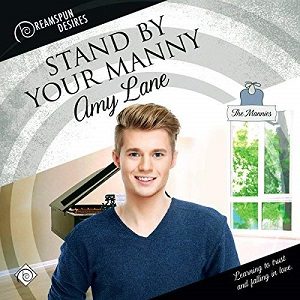 Title: Stand By Your Manny

Blurb: Sammy Lowell has his hands full juggling his music, college, some pesky health problems, and making the uncles who raised him proud. He needs help fulfilling his after-school duties with his siblings. Nobody can be in two places at once – not even Sammy!

An injury puts Cooper Hoskins in a tough spot – if he can’t work, the foster sister he’s raising can’t eat. But years in the foster system have left Cooper short on trust, and opening up to accept help isn’t easy. Luckily, family intervenes – Cooper needs a job so he can care for Felicity, and Sammy needs someone who can see past his illness to the wonderful things he has planned for his life.

Each heals the damaged places in the other’s heart. But falling in love is a big responsibility for young men deep in family already. Can the two of them get past their fear of the immediate future to see forever with each other?

Review: I absolutely adore Amy Lane’s books. They are sweet and beautiful slow burn romances that are just nice to read or listen and relax. They are the type of rather soothing because they are so sweet. This is the third book in Lane’s The Mannies series and I adore it as much as I do the two previous installment. There is nothing short to say, I love the simple, sweet love story between Sammy Lowell and the many hired to care for his siblings, Cooper Hoskins.

The audio was made better by the narration of Peter Brooke, which just hit the mark in tone with each character. It was something that I was extremely curious when I downloaded the audio because this is a new narrator to me and have become quite accustomed to definite set of three or four narrators I regularly hear for MM romances.

Way back in book 1 (The Virgin Manny), and chronologically approximately 10-13 years after, we met little Sammy Lowell. He was just a little kid who was grieving the death of his mother and was now being raised by his beloved uncle. It was brilliant catching up with Channing and Tino – Sammy’s dads for all intents and purposes, who adopted more kids over the years. Now Sammy is all grown up and he can’t help his uncles (I’m sticking to uncles I’ve decided) with the kids as well as juggling his music, college classes and assignments and a very serious health problem. So, Channing (and Tino) decide that they are going to hire a nanny. This is where Cooper Hoskins enters the picture. Cooper comes in to become Sammy’s rock, although that was not without teething problems on both sides, especially Sammy who felt some resentment of having help called in. Cooper, however, quickly sees past the walls that Sammy has built around his mind and heart and sets on the path for a sweet love story.

It was also funny catching up with Tino’s nutty family, which feature prominently in both previous books. And that is one of the main things I love about this series – the absolutely wonderful vibe of family and love is front and center throughout as guys come to terms with who they are, and they find their HEA with an equally wonderful man. I love that the whole Robbins family create of chaotic atmosphere of welcome and love for anyone who comes into the orbit of any of their clan.

Wonderfully sweet, simple about relatable and mostly realistic characters, this was purely enjoyable, and I can’t wait for the next book in the series!