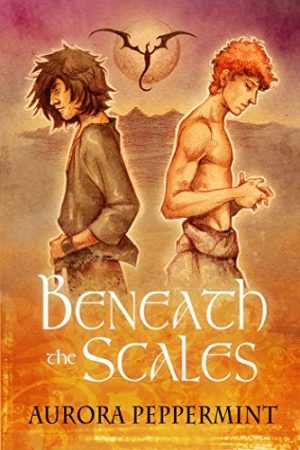 Title: Beneath the Scales

Blurb: Loyalty and truth will be redefined as a young orphan undertakes a quest that will change his life.

Martus is doing all he can to help his magically gifted sister, Elsaben, living with the frustration that it’s never enough. They’re living hand to mouth on what he can steal, and under the table jobs aren’t enough for Martus to fund the training Elsaben needs. He’s desperate to find a way to help her, but he’s getting a reputation as a troublemaker, which will only endanger what meager living he’s already scratching for.

His life changes drastically in the course of a single day when a dragon attacks their village, leaves it in flames, and then carries Elsaben away. Knowing there is nothing else for him to do, Martus swears to rescue her and avenge their home, knowing he’ll either return triumphant… or die.

What he finds in the mountains challenges his perceptions and prejudices, leading him discover that he may have a chance at a better life, including a friend of the likes he never expected. This adventure could change his worldview—including the beliefs he’s always accepted as the norm.

Review: Martus is doing his best to get the help Elsaban needs for her magic since their parents died in a fire. One day a dragon, Hal, shows up and starts tearing up the town and eventually takes Elsaban away. El eventually returns and Martus sets out to kill the dragon.

Hal is a sweet boy who has no one to help him control his dragon. When he shifts he has no memory of it or the things he does. Due to Martus and a letter he writes, a group of people invade where Hal’s home is. Martus does try to protect his new friend.

I liked the idea of the story but the delivery was lacking as at times as it jumped from one thing to the next with no warning. Martus and Hal are both alone and I liked that despite the rocky start they became friends.