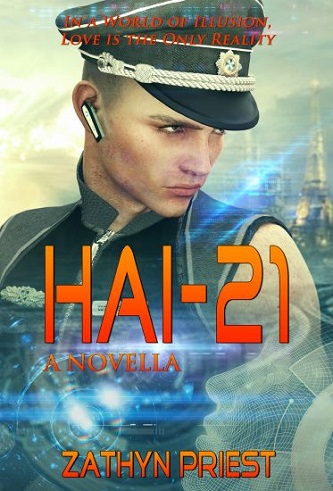 The last person Luke expected to fall in love with is Vice President Mitchell Rylor’s son, Dr Elliot Rylor. When Elliot shares confidential information about a new android, HAI-21, he also reveals the atrocities behind its creation. Luke must help Elliot and Mitchell cease the android’s production before innocent people die.

But what if the truth of HAI-21 is more horrific than Luke imagined? Can he conquer his own fears to save Elliot, to save himself, and assist Mitchell to overthrow a tyrant dictator?

Review: This story was outstanding. I thought I knew what was going to happen and I was happy to be proven wrong in my assumptions.

Not everything is as it seems in this little community. Androids play a vital role in the help they give this city. Luke is fierce though he does suffer panic attacks. I love his dedication to his job. Elliot is sweet and funny yet a force to be reckoned with when riled up.

Luke and Elliot grow closer as questions arise about the androids and the president. The twists and turns had me astounded with their reveal. I was in awe of the book and how story unfolded. I have to admit I was impressed with the plot and the many characters throughout. I loved Freddie, Luke, Elliot and Mitchell.

I was curious about Luke and what happened to him as that was not said in detail other than that I was delightfully amazed with the book. I really hope there is a sequel to this story as I would love to read Freddie and Mitchell’s story especially with how this one ended.

Blurb: Can Jordan stop Tyler’s life from spinning out of control and save their love for one another, or will tragedy tear them apart?

Tyler Curtis is a rock star with a notorious reputation as legendary as his awesome talent, but reality is far different to the myth a controlling manager has built up around him. Jordan Braxton is a website designer, prefers a quiet life, and is ready to settle down with one man. A chance meeting with Curtis turns Jordan’s ordered world upside down. Can Jordan stop Tyler’s life from spinning out of control and save their love for one another, or will tragedy tear them apart?

Review: Tyler Curtis (Alec) is a huge rock star, but the man behind the icon is far from the image that is portrayed. A chance meeting in a hotel brings him the love of his life, but he is entangled in a web created by his heavy-handed manager and Alec doesn’t know which way to turn. Jordan would rather rip his tongue out than talk to Tyler Curtis, but a chance meeting shows him the man behind the image. Now Jordan wants nothing more than to protect Alec from the world, but facing the maelstrom might be too much for both men and Jordan has to become Alec’s eye in the storm.

This story is a re-released edited version of the original 2008 edition; there are some minor changes, but nothing to detract from the awesomeness of the book. So first off, hands up, I have read every edition that I could get my hands on, and yes I have read The Curtis Reincarnation numerous times… more than fifteen and less than thirty and let’s leave it at that. Zathyn Priest has created a story that gives you most things that you want (I will forgive him for the lack of bloodshed and gore, the pub scene more than makes up for it), it has angst, stress, medical issues, love, adoration, hope, devastation, vindictiveness, friendship and just deserts.

Jordan and Alec meet by chance and are both soon swept away in the flush of new love.  Yes, it happens quickly, but it fits them both as characters. Alec confides the truth about his lonely existence and Jordan sweeps in to support Alec as he makes sweeping decisions that his nasty manager will not like. It’s the beginning of the reinvention of a rock star, but Alec faces so much more on a personal level when the mother who abandoned him suddenly gets in touch. Jordan is the man who picks up the pieces and proves that Alec Tyler is a man who deserves the unconditional love that he is showered with.

All the characters in this book are brilliant, they are well written and worm their way into your hearts, well except Frank (manager) and Leanne (mother), but they earn your contempt nicely. The story flows well, and there will be times where your eyes fill with tears and your breath hitches. There will be times that you smother a laugh or giggle and there are times when you sigh and ‘awww’. There are sweet moments, angsty moments, devastating moments and happy moments, there are some fumbling moments and erotic moments and some very loving moments, one of my favorite moments is during the wedding reception, it was just so horrifyingly beautiful.

This is a story not to miss, and if you haven’t already read it, then come out from under your rock and read this wonderful book. I personally will be re-reading this book until the release of the sequel The Violin Player.