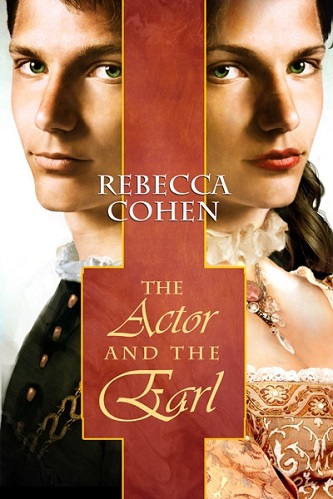 Title: The Actor and The Earl

Blurb: Elizabethan actor Sebastian Hewel takes his bow at the proscenium only to embark on the role of a lifetime. When his twin sister, Bronwyn, reneges on the arrangement to marry Earl Anthony Crofton, Sebastian reluctantly takes her place. At nineteen, Sebastian knows his days as a leading lady are numbered, but with this last performance, he hopes to restore his family’s name and pay off his late father’s debts. Never mind the danger of losing his head should he be discovered.

He didn’t expect Anthony to be so charming and alluring—not to mention shrewd. While he applauds Sebastian’s plan, Anthony offers a mutually beneficial arrangement instead. Sebastian will need every drop of talent he has to survive with both his head and his heart intact, because this is the best part he’s ever had.

Review: Sebastian is an actor who is called home by his cousin to perform the role of his life time. Sebastian’s sister has eloped, but she was due to marry an Earl. Now, due to family debts, Sebastian has to fill the role of blushing bride. Anthony is far from hoodwinked and offers a solution that benefits both of them. Now, they just have to fool the nobility and maybe they will both keep their heads.

This is an interesting story of Elizabethan England and the illicit marriage of an Actor and an Earl. Sebastian loves acting, but just wishes he could get more masculine roles. Now, he is offered the role of a lifetime after his sister elopes, but it is a role that could cost him his head. But, he never suspected it would also cost him his heart. Anthony is a man, who will take his pleasure where he can, discovering his future brother-in-law will be his wife, he uses it to his advantage. But, the marriage affects him more than he thought and his scandalous days are numbered.

The characters in this book are very interesting with both Sebastian and Anthony acting like men of their times. Although, at times Sebastian had to act like a woman of their time. Anthony wasn’t a perfect husband, although he did try. Changing a way of life was hard for him and he messed up several times with Sebastian. Sebastian made for a good wife, but he was a great man and the way he tried to stick to his guns with Anthony was quite impressive. The setting and time frame were well done with some great descriptions of the theatres of the time period.

I must admit to not warming up to the characters all that much, Sebastian and Anthony seemed to have no real connection between them and I didn’t feel as though they really got emotionally involved with each other. It felt more like convenience than any real attraction especially from Anthony, and even later it still felt like there was a distance between them even after they declared their love. Their sex life was hot though and that was the only time I felt a real connection between them. The best part for me, was when Anthony starting fighting for their relationship and began to court Sebastian in earnest.