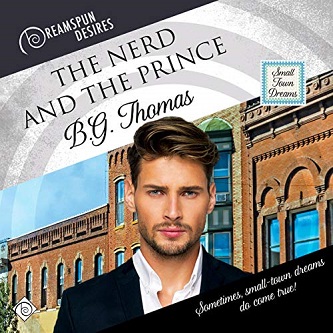 Title: The Nerd and the Prince

Blurb: Prince Charming is the man next door.

Small-town business owner Jason Brewster has big dreams: world travel, adventure, and, most of all, a passionate romance worthy of a fairy tale. But he doesn’t believe fantasies can come true…. Until Adam moves in next door. He’s handsome, cultured, European, and, best of all, in-terested in Jason. It’s like something out of the stories Jason loves.

But Adam – whose real name is Amadeo Montefalcone – has a secret. He’s royalty, prince of the small country of Monterosia. Only he doesn’t want to rule, and especially doesn’t want the love-less marriage waiting for him at home. So he ran away in search of true love. With a man. And with Jason, he finds it. But Adam can’t run forever. The truth will come out. If Jason can forgive Adam’s deception, they might find their happily ever after.

Review: The Nerd and The Prince by BG Thomas a proper fairy tale, royal romance type story that is probably more than a few people’s guilty pleasure. BG Thomas is a relatively new author to me, so I’ve been keen to read or listen to more. The story itself is a lot of fun and was enhanced by the narration by Seb Yarrick.

I checked my Audible library and was shocked to realise that this was only the second book I’ve heard Seb Yarrick perform. I wrote in a previous review that I’ve heard him before, but I think I must be mixing him up with another narrator who does good European and English accent. Oops. My bad. Sorry. Nonetheless, this does not take away from the fact that I feel that Seb Yarrick is a wonderful narrator, his performance injects the right emotion into the story and characters, and really sets the tone well for the whole book. I’m looking forward to more performances by Yarrick in the future.

The story, overall, is a lot of fun and I personally feel that it is a very refreshing change from the usual modern fairy tale royal romances. Unlike some other stories, he did the drama and secret keeping thing without making it explode to provide more, and probably, unnecessary drama. The Prince knew he was falling in love and that he had to tell his nerd the truth and I liked how this all went down.

The story is simple enough. Prince Amadeo Montefalcone of Monterosia, a relatively unknown European principality, decides to run away so he can live a normal life, at least for a little, as an out gay man instead on being forced into marriage with a woman. The principality itself is fictional, but the town that Amadeo tell people he is from, Trieste, is near the Italian/Slovenian border. He runs away to small town America and becomes Adam, a cultured Italian man looking to experience a bit of the US. Then Adam meets his neighbor, the owner of a small book store and café/diner, who dreams of one day travelling the world and falling head over heals for his prince charming. The two guys have chemistry, there is no doubt of that, but there is, naturally, the obstacle of the whole gay prince thing and said prince not telling anyone his real identity as he falls in love.

The Nerd and the Prince is a totally sweet and fluffy story. It is a true romantic story with a lot of heart and feeling. I can’t wait to see what else BG Thomas has in store for us in this series.