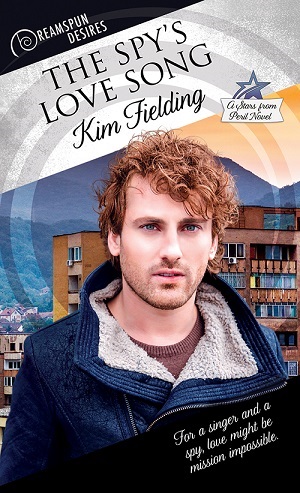 Blurb: For a singer and a spy, love might be mission impossible.

Jaxon Powers has what most only dream of. Fame. Fortune. Gold records and Grammy awards. Lavish hotel suites and an endless parade of eager bedmates. He’s adored all over the world—even in the remote, repressive country of Vasnytsia, where the tyrannical dictator is a big fan. The State Department hopes a performance might improve US relations with a dangerous enemy. But it means Jaxon’s going in alone… with one exception.

Secret agent Reid Stanfill has a covert agenda with global ramifications. Duty means everything to him, even when it involves protecting a jaded rock star. Jaxon and Reid’s mutual attraction is dangerous under Vasnytsia’s harsh laws—and matters get even worse when they’re trapped inside the borders. Romance will have to wait… assuming they make it out alive.

Review: I was looking forward to reading the Spy’s Love Story for two reasons. One is that I have discovered that I really enjoy Kim Fielding’s books. The writing style is easy for me to connect to and I find a majority of Fielding’s characters both relatable and entertaining, at least on some level. The other reason I was drawn to and looking forward to reading the book is completely shallow – I don’t normally make a comment on the front cover but for me this book’s cover was… well in a word, hot. Basically, red/auburn haired men are completely my type, so the cover model hooked me when I saw the cover on the Dreamspinner website. I like to think I’m rational, but I can be as fickle as the next person, I suppose.

Right. So. Onto the story.

For me this book is a mix between The Cold War (in the style of The Man from UNCLE) and the Seth Rogen/James Franco movie The Interview. These were the movies/television that became my pop culture reference for the book, so if you don’t know what I’m talking about you could also think gay James Bond with a spoiled Rockstar and hot sexual tension. If a pseudo-James Bond minus the Bond girls is your thing in a romance this book will probably go for this one.

As I said, we have a spy and a Rockstar.

Jaxon Powers transformed his life and moved to the big city to try to make his big break after his parents took his coming out badly. In fact, he hasn’t spoken to them in years. But now he has made it big and a big name. He’s doing world tours, recording albums, and basically living the sex, drugs and rock n’ roll life style. He is a spoiled, bored and jaded celebrity. Then one days he gets what has to be the strangest request. Apparently, the dictator of some eastern European country is a massive fan of his and requests that Jaxon fly over to perform a couple shows. The US State Department see this as the perfect opportunity to see into the country Vasnytia and get some intelligence. Vasnytia is basically like North Korea/USSR.

This is were Secret Agent Reid Stanfil comes in. He is all that is awesome and the embodiment of a secret agent man: he’s ex-military, knows the local language, sexy as well and good to have when you’re in a spot of trouble. He accompanies Jaxon to Vasnytia and goes to all lengths to ensure the man’s safety, as well as conduct any secret agent type business. They have an instant connection, but Reid is well aware of the dangers of giving into his base desires. However, things go awry, to put it nicely, and when the guys are running for their lives the last thing they have time for is to give into their feelings.

I enjoyed the book, though I kept thinking back to the movie The Interview more often than not. I really liked the two characters together and I like that they didn’t have sex in stupid places at ridiculous times although they had a good chemistry. I’ll admit that the chemistry was a little flat at the beginning, but I got on board by the end of the story.