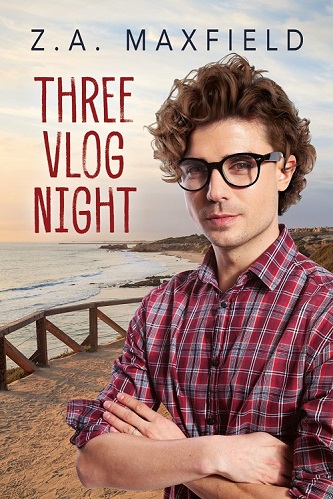 Blurb: Ajax Fairchild’s online alter ego has caused him trouble before, but never like this. After multiple death threats, his loaded parents decide he needs an enforced digital vacation and the best bodyguard money can buy.

That would be Dmytro Kolisnychenko, former soldier, former hired muscle for the Ukrainian mob—until he lost his happy home life to an enemy with a homemade bomb. Now he wants only two things: to spend every precious second he can with his daughters, and to provide for them by protecting people who can’t protect themselves—even entitled little asshats like Ajax Fairchild.

But Ajax doesn’t fit into the spoiled little rich kid box as neatly as Dmytro would like. Dmytro doesn’t have time for a romantic dalliance, and Ajax is a client, albeit one with unexpected depths. With one coincidence after another driving them to the sleepy seaside town of St. Nacho’s and away from their planned safe house, they grow to trust each other and find that love follows trust. Now they must learn where the threat to Ajax is coming from and neutralize it… before it’s too late for their happily ever after.

Review: Three Night Vlog, by ZA Maxfield, is the third book in the series Plummet to Soar. I didn’t really know what to expect. I’ve read books by Maxfield in the past but nothing really came to mind when I was reading the blurb other than “this looks like a fun book with a dash of danger”.

Three Night Vlog works fine as a standalone book. I knew it was part of a series when I picked it up but it wasn’t until about five minutes ago that I realised that it’s the third book in the series. Regardless, I am now curious about the preceding two books.

In the present story we are introduced to Ajax Fairchild. He’s a rich kid – young adult – in need of a bodyguard. But he isn’t your run of the mill rich kid with too much time and money on his hands, instead Ajax is something of a social warrior. After deciding that he didn’t need to put up an act on his blog as his internet vlogger alter ego, he announces that he is gay – in a stunning, drunken YouTube video – Ajax’s parent hire a bodyguard and force him to stay away from the internet. He finds himself in the beautiful seaside town of St Nacho’s after more death threats force the plan off script.

Dmytro Kolisnychenko is a former soldier, single father and the bodyguard hired to protect Ajax Fairchild. Dmytro accepts that he has a fluid sexuality, yet he cannot act on any attraction to Ajax, simply because the man is his client, and he has shied away from any sort of romance since a bomb killed his wife and destroyed his happy home. He spends as much time with his two cute daughters, but it is the events of the past that make him want to protect people that cannot protect themselves, which is a way for Dmytro to find peace and salvation. But as the threats escalate and the attraction grows, both Dmytro and Ajax need to keep their eyes on the current situation as well as work through their feelings and the emotional baggage of the past.

As I said earlier, this is a fun book with a dash of danger. Dmytro and Ajax have a sizzling attraction, although they both go on quite a journey before they can be anything real to each other. For those that like their romance with a bit of action, sexy eastern European bodyguards and a quirky leading man, this is a great book to get into.