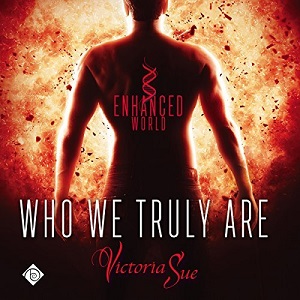 Title: Who We Truly Are

Blurb: Talon’s deadly abilities are spiraling out of control. Desperate to keep Finn safe, Talon struggles to protect the man he loves with all his heart and not become the greatest risk to Finn’s life.

Finn has no choice but to offer himself as bait for the evil forces kidnapping enhanced children, facing danger he is untrained and unprepared for, and he will have to do it alone.

Does Talon have one last fight in him? Will he slay everyone who wants to destroy Finn and the team, or will he finally discover that to defeat their enemy and the ultimate threat, the biggest battle he has to face is one with himself?

Review: We now have a tighter team with the H.E.R.O’s of the Enhanced World. But as Finn fights to carry his own weight with the team, Talon fights against his own fears and constantly jumps in to protect him. You can imagine where this puts strain on a newly formed relationship.

What I enjoyed about this book the most was seeing Finn develop stronger friendships with other team members. The author gives us a broader picture of not just Talon but Vance, Gael, Sawyer and others.

There’s a mystery, action, detective work, missing kids, and plenty of tension both sexual and emotional between Finn and Talon again. We learn more about different team member’s enhanced abilities and that Talon’s is changing, and he’s uncertain about his own control over it. When the story comes to it’s climax we’ll find out if Talon is truly as strong as Finn believes him to be. Talon will have to learn to give all his trust to the love of his life, his very life depends on it.

Victoria Sue also does sexy-times with flair and plenty of passion. I’m never disappointed, though I could always beg for more.

Nick Russo’s narration is smooth, varied voices for each character, and has great emotional attributes throughout. Did I mention I REALLY like his vocal characterization of Talon. Mmmm-mmmm, good!

If you enjoy the X-Men/Thirds kind of world building you’ll love Five Minutes Longer and the entire Enhanced World series by Victoria Sue! Hold on tight, you’re in for a ride and an all-nighter!