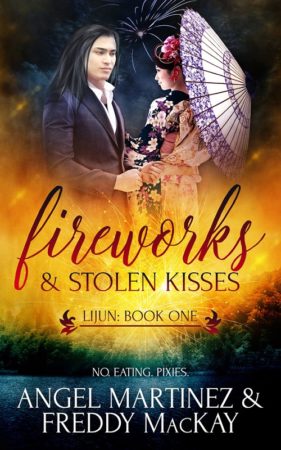 At the annual Global Lijun Alliance conference in Tokyo, Tally Bastille makes the first impulsive decision of his life. Others perceive his uktena—the enormous legendary serpent that’s his dual-spirit—as a threat, which makes him all too aware that he frightens fellow lijun. But an encounter with a passionate, obviously not-straight otter lijun one evening convinces Tally that he’s found his Em’halafi, his destined match. Tally is determined to barrel through all obstacles to make the match happen, including the otter’s conservative, traditional family.

Trained as a Satislit—a bride-son—Haru Tanaka chafes at the strict boundaries set around their life. They rebel against their clan’s constant attempts to force an arranged match and wish desperately for someone who will love them. At the conference, Haru is horrified to learn their family has accepted an offer for them, one too lucrative for the clan to refuse. Not only has the Urusar sold Haru to a stranger, but the lijun is also a giant snake and one who believes in the tired old superstitions regarding Em’halafi. Threatened with banishment if they refuse, Haru has no choice but to marry the wealthy American serpent.

Back in Tally’s home in Wisconsin, Haru and Tally must navigate both the widening gulf between them as they realize how much they’ve misunderstood about each other, and the tricky politics of the lijun clan Tally leads. Murder, intrigue and increasing hostility threaten to tear apart the little town of Wadiswan and the arranged marriage they’ve barely managed to begin.

Review: I really wanted to love this story by the time I finished it. I mean there’s romance?, suspense, murder a whole cast of characters that added depth to the story. However, it Haru’s attitude toward Tally that made me take a step back. I know it’s an arranged marriage but if Haru didn’t want it why didn’t he say anything before the wedding? Instead all he does is complain and basically put Tally down after the wedding night. That really made me angry on Tally’s behalf.

I loved the culture throughout the story. It was fascinating to read about the traditions. Tally was sweet and caring and I so wanted him to be happy. Aside from Haru’s attitude problem I really enjoyed everything else about the book.

I was happy to follow Tally around as he traversed through a world where his mate doesn’t want him at first only to be confounded when murder enters the picture. I felt really bad for Tally in the situation he found himself in.

All the different characters were exciting to read about and what role they each played to bring this story to life.