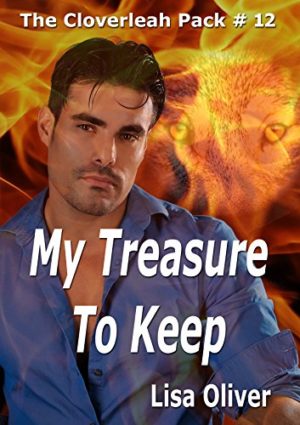 Title: My Treasure to Keep

Blurb: Thomas, paid enforcer in the Cloverleah Pack, was carrying a lot of guilt. He still believed he was to blame for letting Wesley get targeted by the dark elves, almost causing a rift in Cathair and Marius’s mating. The alpha Kane, told him it wasn’t his fault, and Cathair and Marius came through the experience battered but not broken, but Thomas still felt as though he had to prove his worth to himself and the pack. He spends many hours patrolling long after the rest of the pack had gone to bed, determined to do something worthwhile. It was on one of those patrol nights he hears a ruckus outside the territory wards. Dithering as to whether he should help or not, he gets the surprise of his life when his true mate falls right through the magic designed to keep everyone not pack, out.

Ivan was carrying secrets; the main one tucked up in his battered backpack. After a six month long mission to find the Cloverleah pack, he was as surprised as the next man when he fell onto pack grounds and into the arms of his true mate. Unfortunately, other pack members, still emotionally scarred by Wesley’s betrayal, didn’t view his “break in” quite so favorably and Ivan ends up in the Cloverleah cells.

Meanwhile, the dark elves are getting closer and more brazen in their efforts to ensnare the Cloverleah pack. Pack tensions are running high and something needs to be done and soon. Through it all, Thomas and Ivan have to navigate their mating and learn to trust in each other. Secrets will hit the light of day and life for the Cloverleah pack may never be the same. As for Thomas and Ivan – time is running out for them too. A chance arrow, a ray of sunshine; will it mean Ivan and Thomas will get their HEA or will they fall at the last hurdle along with the rest of the Cloverleah pack?

Review: Each book in the Cloverleah Pack collection features a new romantic couple. To enjoy the overall story arc and crossover characters, I would recommend reading the series in sequential order.

Thomas is an amazing shifter who is still reeling over what had happened to Wesley. He felt guilt over not keeping an eye on the shifter, a guilt that was not his to feel. Wesley had been basically taken over by the dark elves, or so they think. When a strange shifter pops through the wards he realizes the young man is his mate, but the betrayal they still felt made the others worried over Ivan. Was he good or was he evil?

Ivan is a very special and very rare shifter. He will only shift after mating his mate not before then. However he is holding onto a very special secret of his own, he is not the only one of his kind. Lets just say Luke is going to be so very happy.

Exciting, fascinating, dangerous, and some sexy times are just a bit of what you get in this book. The characters are a blast and I absolutely loved Ivan. It would seem Ivan has a way that just might stop the dark elves, but it will take the whole group and more. This story is one of those books that will be read more than once. It caught my attention from the start and kept it all the way to the end.

I had a blast reading this and can’t wait to get my hands on the next story. This is one book I would definitely recommend reading. It will have you on the edge of your seat.