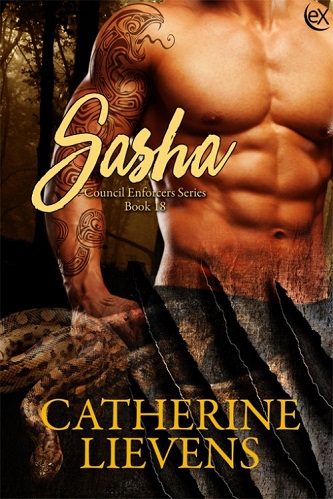 Blurb: Sasha doesn’t want a mate. He barely even wants friends, but he’s given up on trying to keep them out of his life. He’s content as he is, working at the bar in Gillham and going home to his empty apartment. It’s better that way, and safer—for everyone. Because Sasha has a secret, and he’s already responsible for one death, and he doesn’t want anything like that to happen again.

Hunter has always been content with hookups and one-night stands. He’s never really thought about finding his mate—until he does. Sasha is standoffish, and while Hunter wishes he were an easier man to deal with, he’s ready to wait as long as he needs to in order to have him in his life. Still, when he and his team are sent on a mission in the Brazilian rainforest, he hopes that will give Sasha enough time to make a decision about them.

Sasha realizes he’s made a mistake by pushing Hunter away when Hunter doesn’t come back from the mission. Hunter is stuck in a rainforest crawling with members of the Beasts gang, and he needs help. Will Sasha be able to help him, or will he lose Hunter before he even has him?

Review: Each book in the collection features a new romantic couple. To enjoy the overall story arc and crossover characters I would recommend reading the series in sequential order. This particular story is also tied to the Whitedell Pride, Gillham Pack and the Council Assassin’s series. I would start with the Whitedell Pride series and go from there if you want the full impact.

Stubborn mates is one way of looking at it. Sasha had been one of the human’s who had been captured and experimented on. He got a power that scared him and made him not want to even try it. His one try at a relationship had ended up in death and he feared loosing another. He was left with memories as well as scars from what had happened. Then his mate ended up in trouble and damn if he wasn’t going to rush in and help.

Hunter loved sex and never with the same man. Then he scented his mate and that all changed. He just didn’t know how to get through to him and how to help him. Then when a mission went bad, well lets just say the shock of his mate stunned him.

I liked the guys quite a bit although I felt more for Sasha. He just pulled to me more than the others. His story was horrible and I understood him better than Hunter. It is an action packed story with quite a bit of excitement and hot sexy times. This is one of those stories that will be read many times over. I was also glad to see Nysys in it, he always makes my day.

I had a blast reading this and can’t wait to get my hands on the next story.