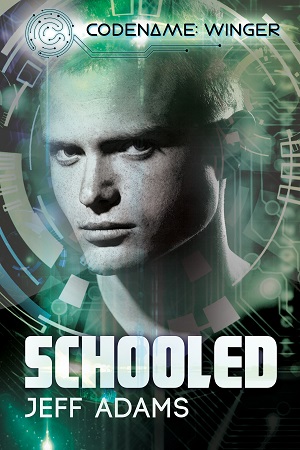 Blurb: Theo Reese is a high school student who’s also a secret agent. Usually those lives are kept separate, but now he must be both at once.

Theo lends his expertise to his school’s computer science club as they gear up for a competition, but his talents are also required by the covert agency he works for. Someone has stolen an encrypted key that can allow them to control the nation’s energy grids. The possibilities are catastrophic unless Theo and his team can reclaim the file.

Theo locates the file in an unexpected place—the computer science competition. As Winger, his secret identity, he must recover the file and keep his teammates safe from the unscrupulous thieves…. But can he do it without revealing his secrets? He can’t blow his cover, especially with so many of his classmates around.

Review: High school genius and hockey player Theo is back in this exciting sequel to uncover who is behind the theft to a file that can let the person control the nations energy grid. While in the process of tracking down the file he is enlisted to help the computer science class with their competition.

At the competition he realizes one key factor. The file has been submitted in the competition. It is up to Theo and his team to try and keep everyone safe when things go wrong.

Exciting and addictive this story has an interesting buzz feeling to it. I liked that Teo put himself in danger to help as much as he could. I felt bad that he had to go through certain things at his age.

Wonderfully and spy filled this story had me on the edge of my seat as the story drew to a conclusion. Some questions remained unanswered though and left me feeling like the story was not finished. Other than that I loved it.