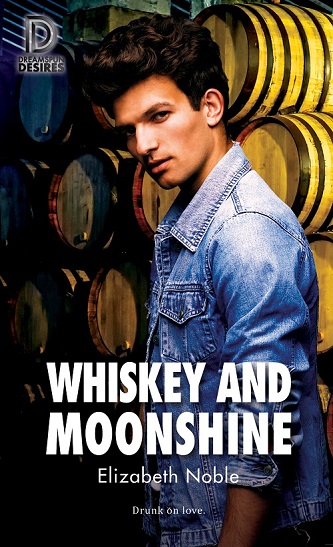 Review: Whiskey and Moonshine is a really charming romance set in Tennessee, obviously amongst whiskey and moonshine stills by Elizabeth Noble. Noble is an author who is certainly on my radar and in my mind as an author whose style and stories I enjoy, and combined with the fact that this is part of Dreamspun Desires line, I was totally down to reading this book.

The story may revolve around whiskey and moonshine, but it is one particular company that is run by a very sexy man who is dedicated to his family’s company and making it more accessible for the younger generations that is the focus of this story. I say that and it sounds like we’re talking about an old guy – we’re not, he’s thirty-six, but the company has been in the family for three generations and it does need to catch up to the current generation.

The story opens with Colton Hale, he’s twenty-four and has been living on the streets of Toledo since he was fifteen, which was when he had been kicked out of home for being gay. The most recent run in with violent thugs has Colton ready to make a new start, so he gets the first bus that will get him out and his new adventure starts. The bus ride brings him to the Kensington family’s whiskey distillery. They’re a rich and hugely successful distillery in Tennessee. Colt manages to get himself a job and just six weeks later shows his ingenuity and passion for his work that leads him to another job for the company.

Alright. I have to do this. I’m about to nerd out and dedicate a paragraph gushing about how awesome it was to read a book that appreciates the Joss Whedon TV showed Firefly. Because I’m a browncoat and the fact that it features so prominently in a book I enjoyed was shiny. So, if you’re not a fan and didn’t appreciate words such as browncoat or shiny, perhaps switch off for the next paragraph.

Right, I’m going to admit. I’m a total sucker for Firefly. Because of that I see the name Mal and I think Captain Malcolm Reynolds – though I can never say I was disappointed to realise that this Mal is short for Malone. Whatever. But it is sweet and smart Colt, who hasn’t had the best 9 or so years of his life getting into Firefly into the book that got to me. I really enjoyed the imagery conjured when Colt mentions the last line in the theme song, relating it to the backdrop of the rambling Kensington distillery/estate. But the best part, when everything seems to be falling apart Colt uses a Firefly reference to get Colt to help him.

This was a really enjoyable story. The characters were relatable and felt accessible to the reader, or at least to me. I’m not sure how to go about recommendations. I mean, it isn’t actually set in a boardroom with a powerful CEO finding love in unexpected places, but this is definitely an employee to lover romance and Mal is certainly a powerful (sexy-as-sin) CEO. So, I suppose if you like any romance set around vineyards (I’ve read a few of those of late) then this is another one to enjoy. There is also an interesting celebrity element, where Colt navigates the world of social media and gains fame as the face of the Kensington brand. Also, in terms of Colt this is a rags to riches romance too. As already mentioned, Firefly fans will be tickled to see love for the awesome show.