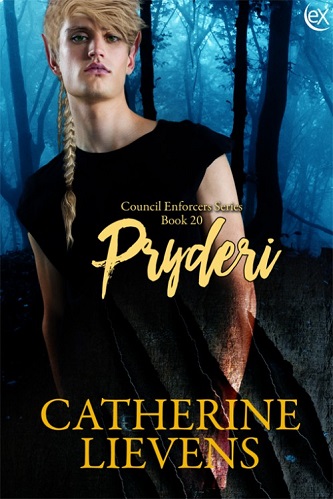 Blurb: Pryderi has known Nate was his mate for weeks—way too long not to tell him. But Pryderi grew up with rejection, and he isn’t sure he has the courage to possibly face it again, especially coming from the man he’s been falling in love with from afar and who represents his future. He’s not going to gain anything by watching Nate from afar, though.

Nate’s world gets upended over just a few days. First Pryderi, the cute Nix he’s noticed more than he likes to admit, tells him they’re mates, then the brother he thought was dead for the past ten years suddenly comes back with the Beasts after him. Nate isn’t sure how to deal with any of them, but Calvin has always been the center of his world, and that hasn’t changed.

Pryderi has a hard time getting through to Nate, who’s terrified of losing him like he thought he’d lost his brother. The fact that Pryderi is working undercover in Nate’s bar to try to find the last members of the Beasts still in town is making things both worse and better—and more than a little complicated.

Review: Each book in the Council Enforcers collection features a different romantic couple. To enjoy the overall story arc and crossover characters, I would recommend reading the series in sequential order. This series is connected to the Whitedell Pride and Gillham Pack so I would suggest reading those first.

Ten years ago Nate’s little brother had been kidnapped and killed. He was still missing him to this day, boy is he in for one hell of a surprise. He was a forty-two year old man who owned a bar and had a bad back. He was not a catch in his eyes. However he has had his eyes on one sexy Nix that comes into the bar.

Pryderi left his family and people behind four years ago. He had not wanted to stay and mate with a female just to have a child and keep his parents happy. He has found his mate and wasn’t to sure how to tell him. He had been rejected by his parents and his brother didn’t truly want anything to do with him. That is until he gets a call, his brother had been abducted close to a month ago and he had not known.

Nate has issues with his mate doing the job as an enforcer. He still felt the loss of his brother, even though his brother is back, but he still was scared. Damn these two really need to learn how to communicate. I always am intrigued by the world this author creates. They just make it seem like you are right there with them and are kicking ass right along side them. It is a pretty fascinating series to get hooked on.

I had a blast reading this and can’t wait to see what the next book has going on.