Hi guys, we have a wonderful collection of authors visiting with their charity anthology A Summer’s Day, we have a couple of great excerpts and there’s a fantastic $10 Amazon GC giveaway, so check out the post and enter the giveaway!❤ ~Pixie~ 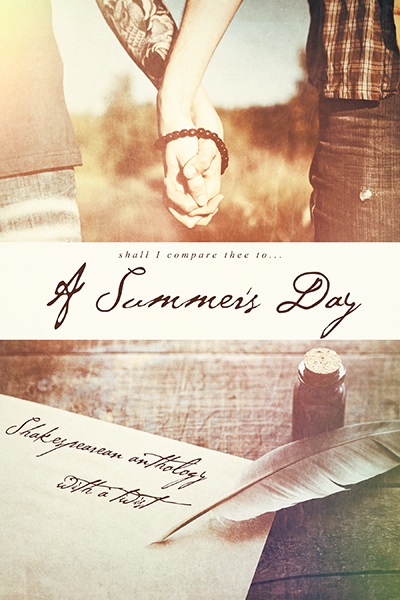 A Summer’s Day: Shakespearean Anthology with a Twist

We’re celebrating Shakespeare’s legacy with this collection of 12 stories based on his works and the way they are often woven into our lives. The twist is that all stories are MM. There are modern retellings of some plays, interpretations of others and one of the sonnets, and delightful referencing of anything Shakespeare.

There is gentle YA romance next to hot sexy stories and all kinds of relationships – first love, May/December, interracial, second chances, happy endings and even a tragic one.

We’re traveling from Ancient Rome through Renaissance England to modern day UK, Venice Beach and other places in USA, Vancouver and Havana.

There’s fun, drama, tears, angst, joy and, above all, lots of true love.

DEEPER THAN DID EVER PLUMMET SOUND
Rory Ni Coileain

Clarence Limont is a slowly fading star of the London stage; convinced his great performances are all behind him, he nevertheless agrees to play Prospero in an off-off-Broadway production of The Tempest helmed by an old friend.

But the poisonous jealousy of other members of the cast may steal the stars from Jaymes’ eyes, and even put paid to Clarence’s illustrious career.
(“The Tempest”)

A FINE LINE BETWEEN
Louise Lyons

When Romeo runs into Julian on the beach, he’s the last person he wants to see as he’s grown up hating him due to his parents’ aversion to Julian’s dad.

Forced to rescue Julian from the sea, Romeo is surprised by his grudging attraction to the other young man.

When simple lust becomes something more, the pair ignore their parents’ anger, but family fights drive the lovers away from home – into a horrifying incident. Will it make the Montgomerys and the Caplins rethink their feud?
(“Romeo and Juliet”)

THE DEVIL AND THE LION
Asta Idonea

Caius Martius and Tullus Aufidius have long been enemies.

Then Martius arrives on Aufidius’ doorstep, seeking a military alliance. Aufidius accepts; however, he wishes their partnership to extend from the battlefield to the bedchamber.

His lust for Martius is one of the reasons he spares his life, but his jealousy will soon have terrible consequences.
(“Coriolanus”)

Kade is in trouble, negotiating a dangerous path between an authoritarian father and wayward sister.

Then Pete storms into his life and tries to take over.

It can only end in disaster.
(“Taming of The Shrew”)

IF MUSIC BE…
Charlie Cochrane

Rick Cowley finds himself taking up am-dram once more, thinking it’ll help him get over the death of his partner.

He’d never anticipated it would mean an encounter with an old flame and the sort of emotional complications the Bard would have reveled in.

Still, old Will had the right word for every situation, didn’t he?
(“Twelfth Night”)

Valentine has been watching Preston date man after man with never more than a brotherly hug for him.

Finally, despairing that Preston will ever love him in return, Val moves away to college, where he meets the glorious Silver, a man with problems of his own, who just might be his answer.

Torn between his attraction to Preston and his growing desire for Silver, Val wonders if he’ll ever find love or will his life become as tragic as any of the Shakespearean plays he loves so well.
(“The Two Gentlemen of Verona”)

WHEN I LOVE THEE NOT
Rian Durant

Desmond, the heir of a business owner is outed in the media after a hot night with his lover, Olvin, who also happens to be the company’s best negotiation expert.

This is only the first step in Ian’s plan to get back at Olvin for choosing Michel Caswell as a main assistant for the latest merger instead of him, a plan in which he’s moving everybody around like pawns on a chessboard, bending the rules.

Will Ian drive a wedge between Desmond and Olvin and get the position he wants or will he realize that there’s something more important that stops the world from turning into chaos?
(“Othello”)

Tony and Bartholomew have been friends for years, but his latest request is a little much.

Bart needs a loan to impress Porsche Keller, a personable billionaire, but the only cash available is from banker and raging homophobe Sherlock Palmer, who has a devious plan for them.

Will our heroes find love and get their happy ending?
(“The Merchant of Venice”)

Claudio is happy to be home after serving his country as a soldier for over fifteen years being stationed mostly abroad ready to settle down.

Hero is still living at home, together with his father, trying to do what is expected a young man his age is supposed to do, work and live every day like it is your last.
The two men meet at a family wedding, realizing they share a mutual dream of finding love and starting a family but evil lurks amongst them. Will these two lovers find a way to be together?
(“Much Ado About Nothing”)

Hollywood darling Jerome Winter always defined himself by his looks—until a fire destroyed them.

His oldest friend and still-loyal manager, Sam, has long carried a torch for him, but with his looks—and earning power—gone, what does Jerome have left to offer?
(Sonnet 130)

When actor Koray Shepherd rescues writer Winter Sirois from the brutal hands of his supervisor, Winter never would have believed the beautiful Turk would share his love of The Bard.

When Koray asks Winter out on a date, Winter takes center stage in his very own tragedy, determined to end his play for today with a happily ever after.

Screwing his courage to the sticking place, Winter sets his sights on the future and Koray… but when the horrors of yesterday resurface, will he crest the waves of fear and despair, or will he be heard no more?
(“Macbeth”)

Competition for roles is always high when the King’s Men put on a play, but David seems to come up against Jacob time and time again, no matter what part he is auditioning for.

But now they both want to be Lady Macbeth and it’s more than simple rivalry that causes the sparks to fly.
(Shakespeare’s Theatre)

And as all the world’s a stage we do hope that one day very soon all the world will be a place for everybody to love whomever they want to love and feel safe.

All proceeds of this collection go to the It Gets Better Project. By reading this book you become part of the hope for a better future of the LGBT youth.

END_OF_DOCUMENT_TOKEN_TO_BE_REPLACED

Hey guys, today we have a collection of wonderful authors who have got together and contributed poems towards the charity anthology Love is Love.

In the aftermath of the horrendous shooting in Orlando where 49 innocent men and women lost their lives and numerous others were injured, the LGBT+ community, along with their brothers and sisters in the straight community, pulled together in shock, grief and devastation . They pulled together to show that love is love, that we all stand together in the face of hate and we will support those who love.

These amazing authors have contributed a small part of themselves in the shape of poems, these poems will stand against hate and invite love in for all time. ♥♥♥♥♥♥♥ ~Pixie~

A collection of poems composed by over fifty authors in aid of the victims and survivors of the Orlando Pulse Attack.

On June 12, 2016, the most horrendous mass shooting in US history and an unfathomable act of hate was directed at the LGBT community in Orlando. The horror of this tragedy reverberated around the world, leaving millions shocked and appalled at the senseless violence that destroyed so many innocent lives.

In a display of solidarity with the victims and survivors of the Pulse nightclub shooting, a group of LGBTQ+ and straight allies, from all across the globe, came together to produce a collection of poems in celebration of love and acceptance.

The resulting Love is Love Poetry Anthology is dedicated to the families and victims of the shooting and all proceeds of this work will be donated to Equality Florida’s Pulse Victims Fund.

In this small way, the authors, along with the readers who purchase this work, seek to contribute to the lives of those who still suffer from the consequences of the malice directed toward them, and offer some positivity and compassion in the face of such bigotry.