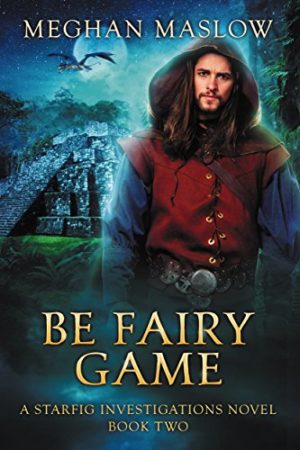 When a simple ‘find & fetch’ case throws private investigator Twig Starfig and newly-minted wizard, Quinn Broomsparkle, into the middle of an EBI murder investigation, it’s just another day in the Elder Realm.

If murder were Twig’s only problem, he’d be the luckiest half-dragon in the land. Murder he can handle. Fulfilling his promise to his scheming, power-hungry father to run for a seat on Lighthelm’s city council? Meh, he’d rather face a demon with a toothache.

On top of their case going sideways, and Twig running for a council seat he really doesn’t want, Twig and Quinn are forced to face some unpleasant realities about their budding romance, while still learning how to handle the wizard-familiar bond they now share. Throw in a red fury with abysmal taste in boyfriends, a ghost pirate-parrot who drinks too much, a murderer who will stop at nothing to get what they want, a host of new friends and enemies, and you’ve got a situation where no one is safe and everyone is Fairy Game.

*This book is part of a series but can be read as a standalone.

Review: The gang is back in this sequel to solve new cases. Quinn, Twig and Bill are close. Bill considers them family. Pie is still searching for a way to find his former pirate captain. There are several new characters added and several deaths that are thrown into the investigation. Not to mention Twig’s dad is getting assassination attempts made on his life.

To put it mildly there is a lot going on in this book. Twig is still having a problem with Quinn’s ability to control him which he does not like. Quinn for his part understands that Twig wants to mate but he hesitant to do so. My mind was spinning as this story payed out. There were twists and turns galore. Magic, darkness and danger seemed in abundance throughout.

It was roller coaster ride for sure as Twig and Quinn threw themselves into solving cases as well as struggling with their own issues with each other. A great cast of characters added depth and mystery and a sense of suspense as the cases played out and clues gathered. 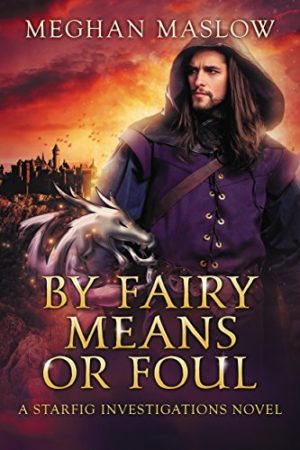 Title: By Fairy Means or Foul

Blurb: The last thing half-dragon, half-fairy private investigator Twig Starfig wants to do is retrieve a stolen enchanted horn from a treacherous fae, but there’s no denying the dazzlingly gorgeous unicorn who asks Twig to do just that. Literally, no denying, because compelling the reluctant detective is all part of a unicorn’s seductive magic.

To add to his woes, Twig is saddled with the unicorn’s cheeky indentured servant, Quinn Broomsparkle. Dragons are supposed to want to eat humans, but Twig’s half-dragon side only wants to gobble up Quinn in a more . . . personal way. Making matters worse, it’s obvious the smokin’ hot but untrustworthy sidekick is hiding something. Something big. And not what’s in his trousers. In the PI business, that means trouble with a capital Q.

Throw in gads of zombies, a creepy ghost pirate ship, a malfunctioning magic carpet, and Twig’s overbearing fairy father’s demands to live up to the illustrious Starfig name. Naturally, an old but abiding enemy chooses this time to resurface, too. Those inconveniences Twig can handle. The realization he’s falling for a human who isn’t free to return his affections and whose life may hang on the success of his latest case?

Review: Twig Starfig, a man who is half dragon, half fairy, has a successful business as a Private Investigator. He meets Brandsome, a unicorn, and is almost sucked into his spell until his servant, Quinn, informs him of whats happening. Twig takes the case to find the horn as well as obtaining his slave Quinn as collateral. These two have an interesting adventure where they come to know one another better as well as encountering a ghost pirate parrot, a red fury demon, Twigs evil stepbrother Nix, a Cyclops, giants and Twig’s father who is a council member and all around pain in the butt at times.

There was no shortage of drama as secrets are revealed throughout. I liked the way Nix and Brandsome were handled as they both deserved what they got for their troubles. Twig and Quinn got off to a great start by helping each other. Quinn’s past was interesting and became the forefront when they were in trouble.

I loved that these two were willing to work together as trust came slowly from one another yet they suffered from the feeling of being different from others. I loved all the characters in this story as they all had a role to play in bringing this book to life. Blurb: Drew Nolan is a loud-and-proud mystery writer with a brutal case of writer’s block. He needs practical experience with the Baltimore police beat to get his latest manuscript to his publisher on time. When he wins a ride-along at a writer’s conference, he thinks he’s hit the jackpot… until he meets his partner.

Review:  This story is part of the State of Love, which spans every corner of the United States.

This is the first book by this author that I have read and I have to say it will not be the last.  I have not had the pleasure of reading any stories by this author and I will have to catch up with her other books now.

At first I wasn’t too sure if I was going to like it but let’s just say that my mind was changed.  Drew wrote a story that won him an award, but now he had writers block and needed to fix it.  So he decided to try to win the ride-along with a police officer at a writer’s conference.  Too bad the cop has a bad attitude.  Then he finds out that Josh was just wasn’t having a good life.  Josh had thought himself in love with his partner but then had to do the right thing and report his partner to their boss.  Now he was getting it from the other officers, not to mention his family disowned him.  Things slowly heat up between these two, but Drew didn’t want to be someone’s dirty secret.

I enjoyed watching these two guys getting it right.  At first I was stuck on the fact that police officers would really turn on one of theirs just because he did the right thing.  They came off as cowards to me, but in the end they stood behind Josh. I enjoyed reading this book and can’t wait to check out the rest of this author’s work.

This is one book I would definitely recommend.

Hi guys! We have Meghan Maslow stopping by today with her upcoming release Ride Along, we have an awesome guest post where Meghan chats about dreadlocks and we have a great excerpt, so check out the post and enjoy! <3 ~Pixie~

Drew Nolan is a loud-and-proud mystery writer with a brutal case of writer’s block. He needs practical experience with the Baltimore police beat to get his latest manuscript to his publisher on time. When he wins a ride-along at a writer’s conference, he thinks he’s hit the jackpot… until he meets his partner.

END_OF_DOCUMENT_TOKEN_TO_BE_REPLACED

Series: Dreamspinner 2016 Daily Dose: Walk on the Wild Side

Blurb: Jiri’s life has been one misery after the next. A cobra shifter, he’s held captive by a collector who keeps him—and other shifters—in a private harem-style “zoo” in the Libyan Desert. Considered a dangerous predator by the other shifters, and little more than a boy toy to the collector, Jiri is friendless, timid, and despondent.

Miksa is the collector’s latest find. But honey badgers are known for their bad attitude, fearlessness, and fighting spirit. Miksa has no doubt he’ll escape, even if it means taking the whole zoo down with him.

When honey badger and cobra meet, there should be instant enmity—after all, honey badgers eat cobras—yet both men find themselves oddly drawn to the other. Romance blossoms, but can it survive captivity and beyond? In order to do so, Jiri will have to find a strength he doesn’t know he possesses and Miksa will have to open a heart long closed to anyone except his immediate family.

Review: Jiri had been sold to a collector when he was just a child so he didn’t act like a cobra at all. He was there for dancing and sex. The collector has brought in a new find, and to Jiri’s surprise it is a honey badger. Honey badgers and snakes do not get along, but these two just about make you feel like you are over heated.

This was a bit strange to me and I wasn’t really sure if I liked it or not. I felt bad for Jiri though. I was glad that Miksa turned out to be a great catch for Jiri. I had fun reading this and look forward to seeing what other stories this author has out.

I would definitely recommend this story.